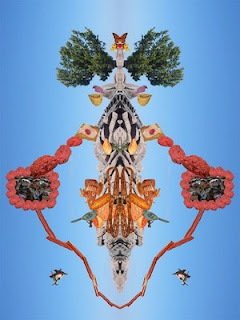 This is one of Barbara's new collages that exhibited at ada last month, her show was titled MEATY PASTORALS. Barbara received a Guggenheim fellowship in 2007, has been a Heinz Foundation fellow at the Virginia Center for The Arts 05-07 and has had recent shows ADA gallery and DEAN PROJECTS (Long Island City).
We also showed some great hamburger watercolors last summer, though about american greed and the perpetually hungry Buddhist ghost, they went nicely w/ my free hot dog saturdays!
Email Post