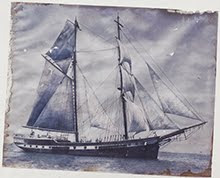 ADA gallery artist Scott Hewicker has co-curated this wonderful exhibit with Larry Rinder ( director of BAM/PFA ) at the Berkeley Art Museum & Pacific Film Archive. It is up through December 5th this year.

From the BAM/PFA website:
Hauntology, essentially the logic of the ghost, is a concept as ephemeral and abstract as the term implies. Since it was first used by the French philosopher Jacques Derrida in a 1993 lecture delivered at UC Riverside concerning the state of Marxist thought in the post-Communist era, the term hauntology has been widely discussed in philosophical and political circles, as well as becoming a major influence in the development of various sub-genres of electronic music.

This exhibition focuses primarily on the museum’s recent contemporary acquisitions, mixing these with a number of other works representing a wide range of periods and styles. Although the artists included in Hauntology do not necessarily see themselves as part of a larger movement, when viewed collectively a number of resonances appear, not unrelated to the musical interpretations of the theme. Works in Hauntology frequently incorporate archaic imagery, styles, or techniques and evoke uncertainty, mystery, inexpressible fears, and unsatisfied longing.

For Derrida himself, hauntology is a philosophy of history that upsets the easy progression of time by proposing that the present is simultaneously haunted by the past and the future. Specifically, Derrida suggests that the specter of Marxist utopianism haunts the present, capitalist society, in what he describes as “the persistence of a present past.” The notion of hauntology also can be seen as describing the fluidity of identity among individuals, marking the dynamic and inevitable shades of influence that link one person’s experience to another’s, both in the present and over time.

In the fifteen years since Derrida first used this term, hauntology, and the related term, hauntological, have been adopted by the British music critic Simon Reynolds to describe a recurring influence in electronic music created primarily by artists in the United Kingdom who use and manipulate samples culled from the past (mostly old wax-cylinder recordings, classical records, library music, or postwar popular music) to invoke either a euphoric or unsettling view of an imagined future. The music has an anachronistic quality hinting at an unrecognizable familiarity that is often dreamlike, blurry, and melancholic—what Reynolds describes as “an uneasy mixture of the ancient and the modern.”

This exhibition marks the first time that a museum has presented works of visual art within the framework of hauntology. Works by Luc Tuymans, Paul Sietsema, Carrie Mae Weems, Bruce Conner, Robert Gutierrez, Diane Arbus, Travis Collinson, Paul Schiek, Arnold Kemp, and others form loose groups in which one can discern various thematic concentrations: the enigma of place and placelessness, memorial and longing, transitional beings, displacement and disappearance, demonic manifestations, auras, elegies of nature, and the translucency of the psyche.

Anonymous said…
I really liked your article.
11:55 AM