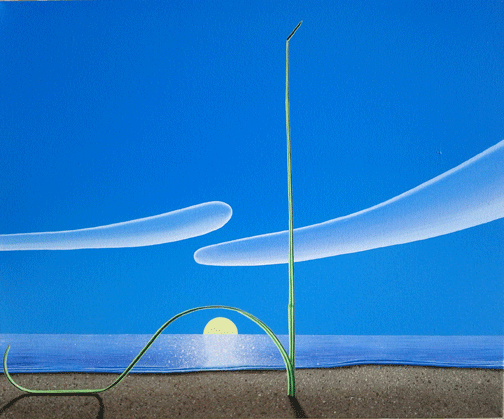 ADA's NYC sister gallery, Mulherin + Pollard is pleased to present Asea, Aloof, an exhibition of recent paintings and drawings by Matthew Fisher. Fisher is a Brooklyn, NY-based artist who makes stylized paintings that utilize symbolic placement, pattern, line, and a sense of the lasting touch of man on landscapes that reference universal timing, placement, and a frozen sense of now.
Fisher's latest works depict the sea as a contemplative space detached from human presence and often from any sense of land itself as well. Here, narrative is replaced by a concern with the quieter drama of the sea itself-the motion of its ripples, the fleeting nature of its form and appearance, and its interactions and relationship with light, space, the drifting clouds, and the passing of time.
Fisher was educated at the Columbus College of Art and Design and received his MFA from Virginia Commonwealth University in 2000. He has had numerous solo exhibitions including at Heskin Contemporary, New York (2010); RARE Gallery, New York (2009); ADA Gallery, Richmond, VA (2009 and 2006); and the University of the Arts, Philadelphia, PA (2006); and has shown extensively in group exhibitions in the United States and abroad. He was awarded a Fellowship in Painting from the New York Foundation for the Arts in 2010.