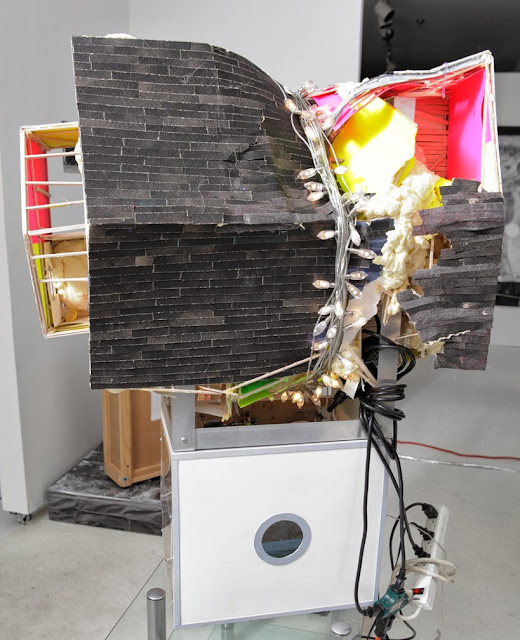 The Dictionary from the Royal Galician Academy once defined saudade as the "feeling and mood caused by the longing for something absent that is being missed. This can take different aspects, from concrete realities to the mysterious and transcendent." But are those who don’t remember the past condemned to repeat it? In Humor Me, opening on October 3rd at Mulherin-Pollard Projects, Bruce Wilhelm contends with the notion that repeating the past is not as onerous as it may seem. “I cringe whenever I think of the past, no matter how positive the recalled event could be. [Though by] Looking at my earlier work and the attempts to match imagery with values and find processes to keep up, it seems clear the heart of the game is the interaction between the three. I see imagery and processes changing values as much as I see any other combination; new values change process, and imagery has to change, and so on. I cringe at that wishy-washy shapeshifter. This isn’t a game Bruce, pick something and stick with it, employ yourself. Of course there are problems, what is at stake in the art world is humorous, it is a game here, and I will act accordingly. Furthermore, there are no boundaries between my studio practice, my job as a floor painter, the gallery, the bar, etc. The stakes are real, there is no game, what I choose to stand behind has consequences. I must employ myself to a good cause. Thinking is undervalued while actions so often seem underthought. Until I find myself in a world which has made up the difference I will encourage people to think more. I’ll continue looking for interesting questions by definitely not playing games here, there or anywhere. What better way to start than rewriting the past, setting up the possibility for what was missed to appear and then be replaced.”

Humor Me builds a conversation between a diverse range of available things; turning the idea of pastiche inwards, combining tropes and material from prior bodies of work. The resulting bricolage is produced via Wilhem’s ability to self-edit his past without cringing too much.

Wilhelm received his Master of Fine Arts from Rhode Island School of Design in 2012. Prior to that he earned a Bachelor of Fine Arts in Painting from Virginia Commonwealth University in 2004, and is a co-founder of Grizzly-Grizzly Gallery in Philadelphia, PA. He is currently based in Richmond, VA. This is Wilhelm’s third solo show with Mulherin-Pollard.

About Mulherin-Pollard: In 2010, John Pollard of ADA Gallery in Richmond, Virginia joined forces with Katharine Mulherin of Katharine Mulherin Contemporary Art Projects in Toronto to open our sister gallery, Mulherin & Pollard, as a space presenting new curatorial projects and exhibitions to an expanded audience. The gallery’s first space was located in Manhattan’s Chelsea district. In May 2011, the gallery moved to its present location in the Lower East Side.