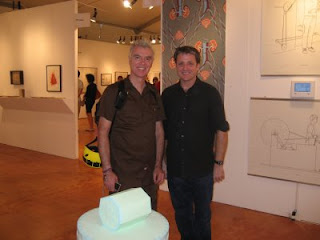 Another throw back from ADA gallery's time machine... David Byrne stopped by my booth at Scope Miami back in December of 2006. In the background of the photo is Shannon Wright's miracle healing Kidney / Urinary tract wallpaper and other works. He seemed to really like a piece by Sandra Luckett, which was a record player w/ a disco ball and a forest of winterized trees that spun around and made a shiny version of the Northern Lights on the wall.
I been in love w/ the Talking Heads & DB's work since I was in middle school. Talking Heads 77 is one of the best records ever. And He came by ADA gallery again at Scope New York 2007 with friend Cindy Sherman , who bought a piece !! I swear I was oh-so-close to simultaneously passing out & crying upon two of my heroes.
Email Post