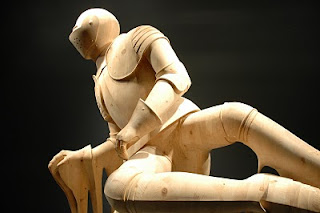 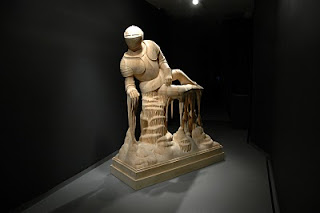 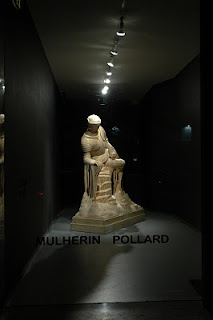 Herrin's wood sculptures have been highly sought after since debuting with ADA gallery in Richmond,Virginia selling to Lance Armstrong at a fair in New York in 2007 which was profiled in the New York Post, as well as The International Art Newspaper. Last year, Armstrong bought a second piece from ADA gallery, an incredible 6ft diameter globe piece with a fallen female figure, which is on view at The Livestrong Foundation in Austin. While touring the facility in a 2010 Men's Journal interview he says, "I love the Herrin piece because I know how much pain and work goes into each one of them".

Morgan's statement on this piece: "Untitled (Knight) is the product of the combination of two subjects: 15th century plate armor, and geological cave structure. Studied separately, these two subjects are completely unrelated. The manmade geometric precision of plate armor is formally opposite of the flowing, organic stalactites and stalagmites. Seen together, these two parts present a striking contrast in form and create a theme of time and the effects of nature. The pose of the figure and the general composition are references to the classical sculpture "The Dying Gaul" of ancient Roman antiquity. Rendered entirely in laminated construction-grade 2 by 4s, the material itself irreverently contradicts this classical allusion, and at the same time draws attention to our own culture's reliance on the fast, cheap, and impermanent."


Come see this magnificent work in all of it's 7 foot tall glory! Mulherin Pollard Projects at 317 10th Ave. NY,NY 10001. Gallery hours are 11 to 6 Tuesday through Saturday.
Email Post