Rest in peace, George Kuchar. We will miss you.

Can't  believe George is gone.
I'm going to just post a few pictures as we drive (i'm riding) down the highway.
such a sad day.
Here are two self portraits from the 1970's or early 80's. 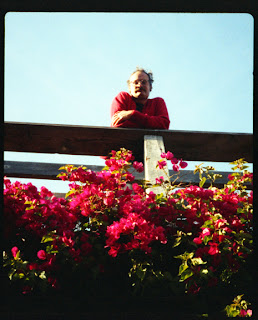 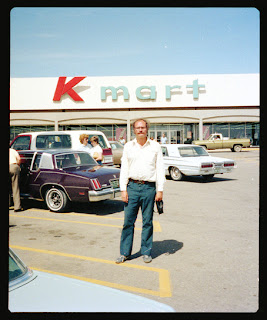 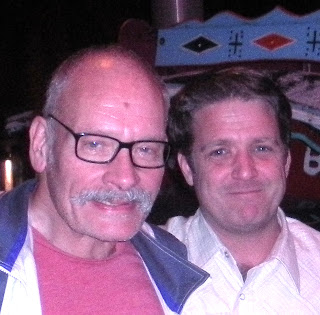 Here's a great shot of George's beautiful smile. I'll never forget that grin!
I'm so happy to be with George it looks like i've turned in to some sort of frog in this photo! This was outside the Tap-Tap in Miami during Basel Week of 2009. 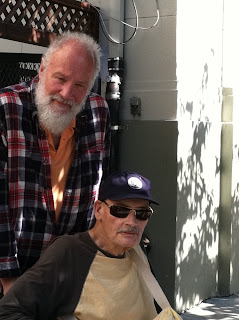 This was just a few weeks ago, outside George's hospice, George's twin brother Mike is taking George for his daily stroll around the Castro. When they got home from their walk, we all sat outside in the courtyard at the hospice and had lunch. It was really George's lunch but he made everyone there share what we brought him as well as what the hospice brought out for lunch. In fact, from his wheelchair he swung his arm out at me with a little pork chop on a fork and made me eat it! it was pretty darn good i must say. This was the last day I'd see George. 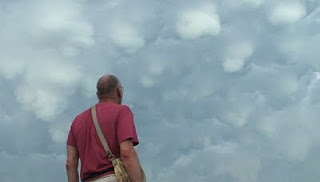 This is a still from Vault of Vapors, George's 2009 summer weather diary. At our show in NYC at Mulherin + Pollard, he titled this still "Bumpy Heavens". George loved the weather. He was really a meteorologist, and he'd remind you of that fact when explaining some weather phenomenon. 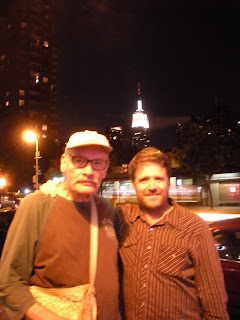 Here we are after our show in NYC in the fall of 2010. We had just had dinner with his pal from childhood Larry Leibowitz. That night, so many of George's old & new pals came out for our opening. Jonas Mekas, Todd Solondz, Kristen Schaal, Ratzo, many others, i'll have to come back and write more. In fact, I could & should have a whole blog devoted to George.
Oh George it's hard to think you're gone.
We love you
Forever & Always
Email Post