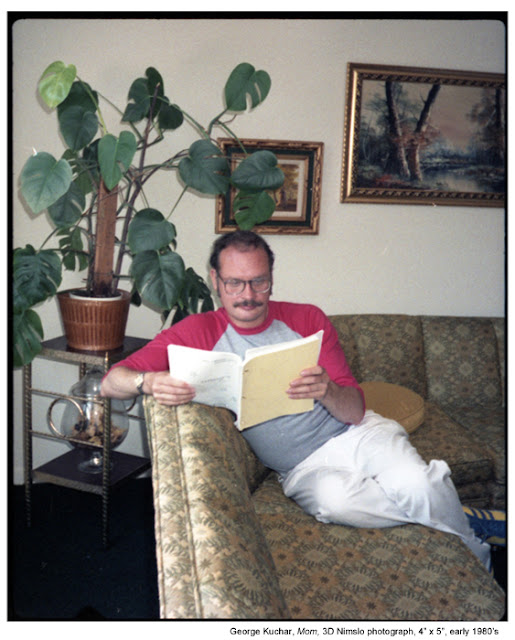 Well, By now you've all probably heard that our friend & gallery artist George Kuchar is in the 2012 Whitney Biennial. A selection of films & video's from George's "Weather Diaries" will screen at the Whitney Museum April 18 - April 22nd. Be sure to go see them!!
My only disappointment is that there didn't seem to be any tangible evidence of the film & video artists at the opening that I went to last Tuesday. It would have been nice & appropriate to have stills of each artist with their names on a wall outside or near the theater where they will be shown. Besides giving the artists a bit more presence at the Biennial, it would also be good advertising for screenings that are over a month away. Just a thought.
While I'm dreaming.. I wish I could make pancakes in the back of the screening room, like George & I did at ATA in San Francisco in 199?. We broke ATA's attendance records that weekend (we had a Fri, Sat & Sun screenings) but our Free Pancake Sunday Screening really had the hipsters lined up around the block!
George showed up at 11am with some hot Milwaukee's Best. He & I sat in the projection room & sipped away.
George was so proud to be included in the Biennial as an artist, though I must say, I think his beautiful mug  shown on the Oscars at the Academy Awards would have really made him so happy.
Those were his people.
Email Post