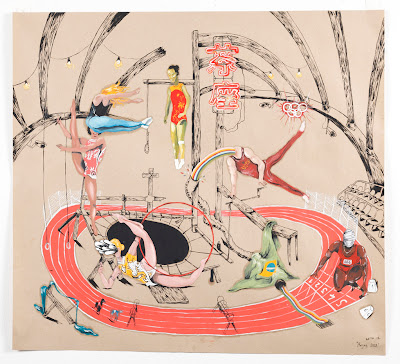 Yann Leto’s paintings have a knack for providing difficulty for the viewer. He has a certain obscene repulsion and attraction with the horrors of consumer culture, politics, the ultra-violence of the mass media, etc. It seems like the artist is making a statement regarding the state of humanity in the 21st Century.    However, if we place leto’s work in a wider context, it takes on a different resonance. His fascination with the mass media and it’s societal spectacle has become a theoretical gadget, if not a readymade. It seems like his strategy is to connect with the viewer by loading the canvas with figures of distinct accessibility, from Disney characters to popular media images of celebrities seen in newspapers, t.v. and magazines - something every media loaded human being has been exposed to.But on closer inspection they don’t call for any desire to build meaning. What leto is interested in is to dismantle the established codes of picturemaking. His strategies are performed on more formal levels, bordering on a farcical kind of conceptualism that nonetheless bludgeoned the conventions of painting to the point of ridicule. In short, leto is only interested in painting and yet he gives you a bad conscience afterwards.”