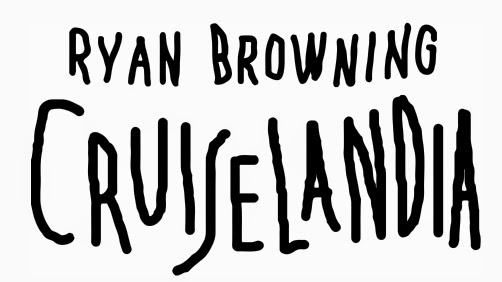 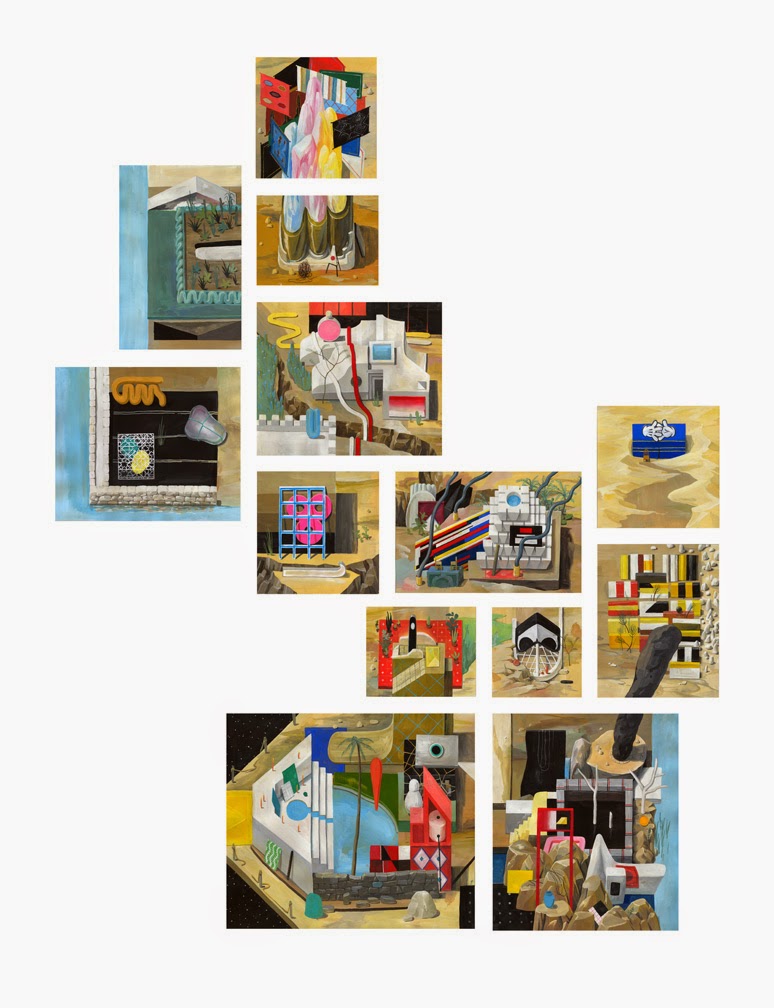 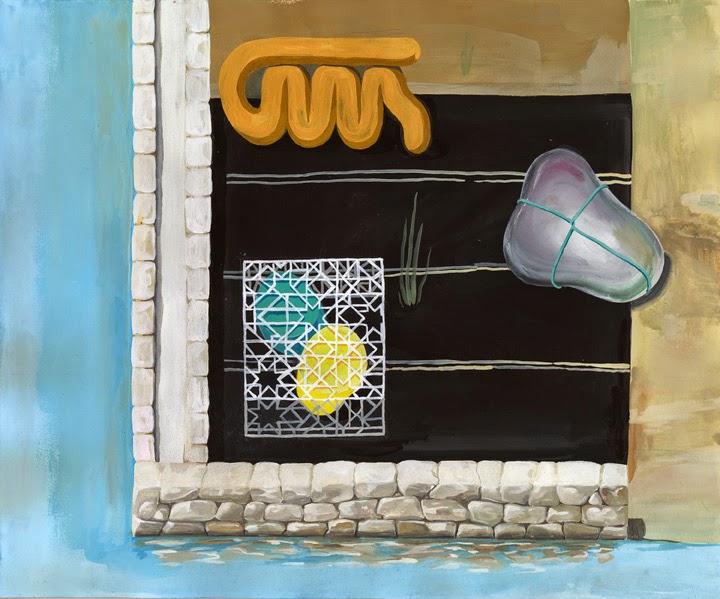 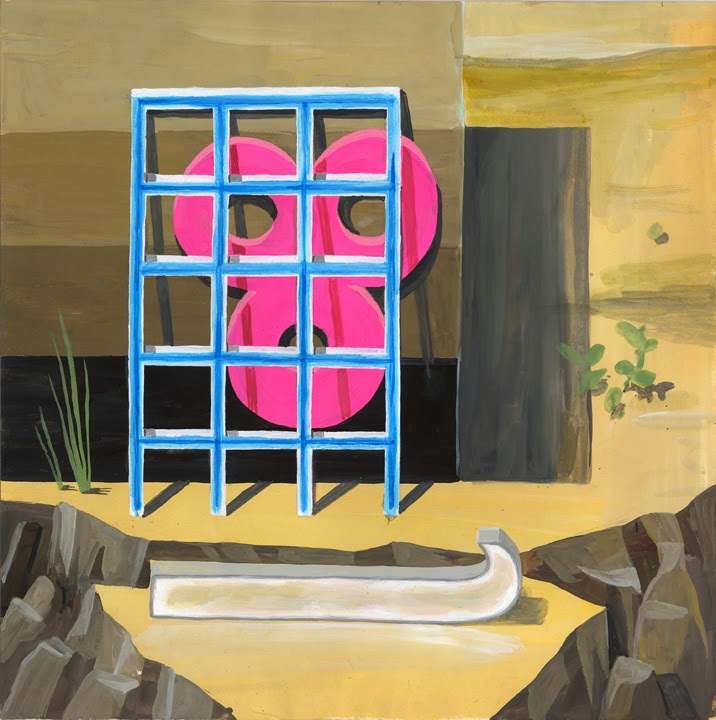 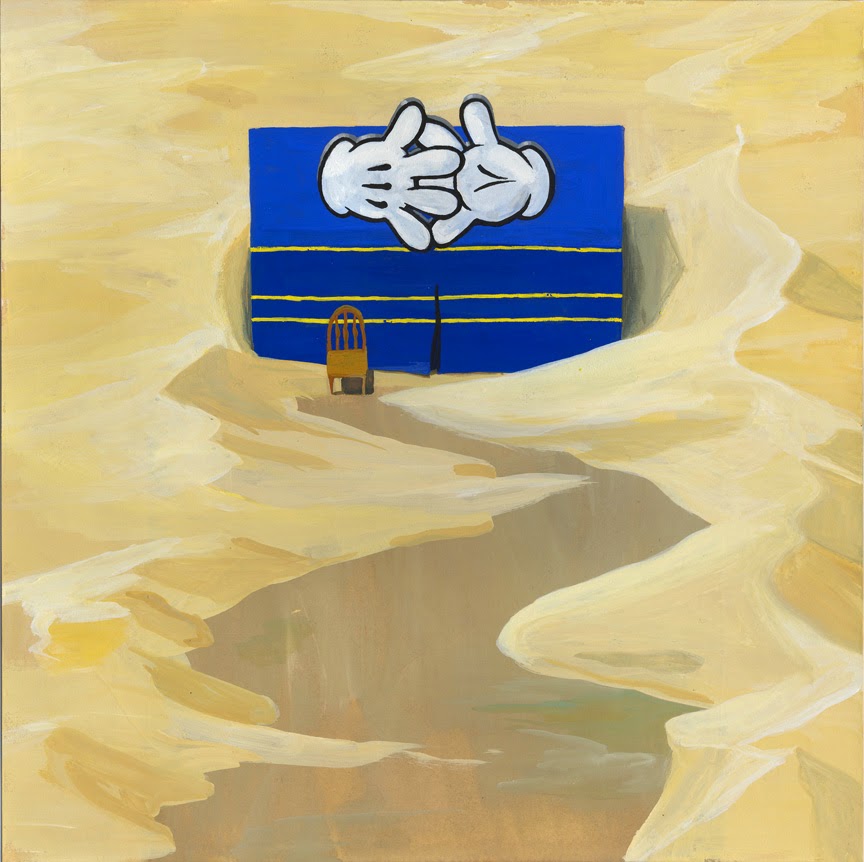 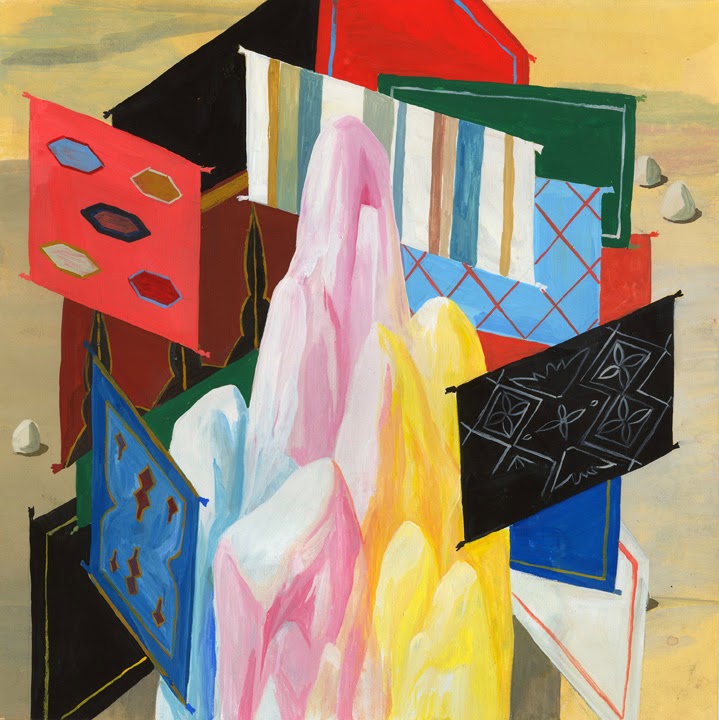 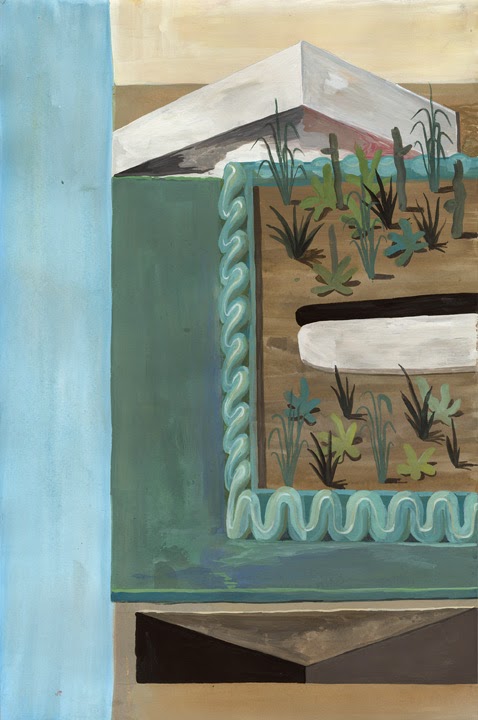 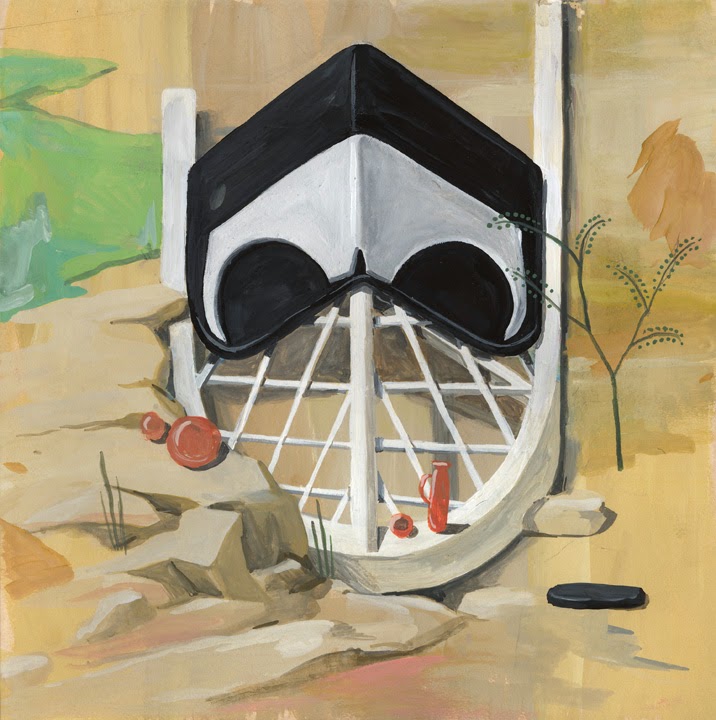 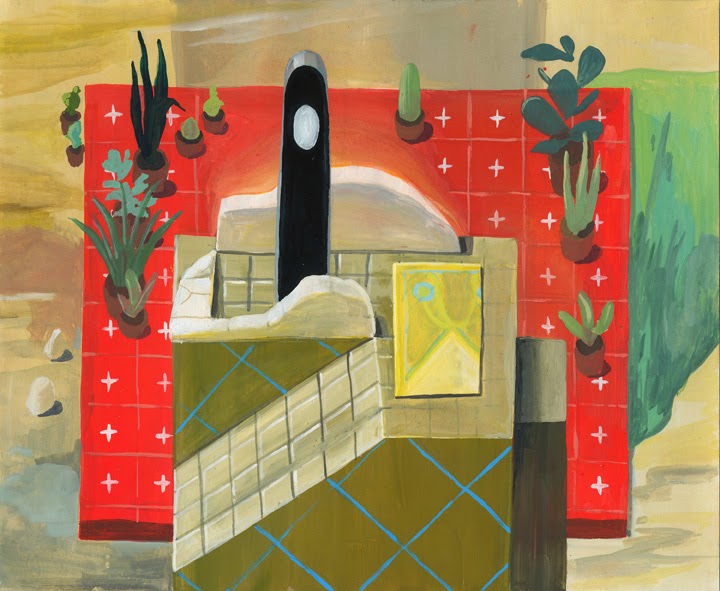 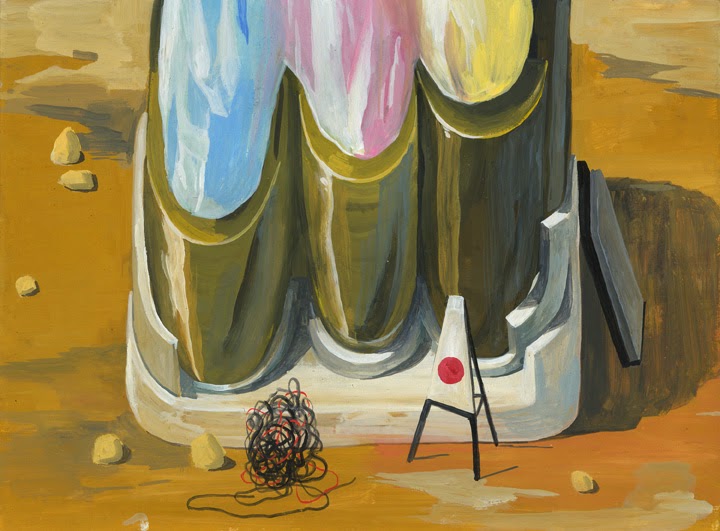 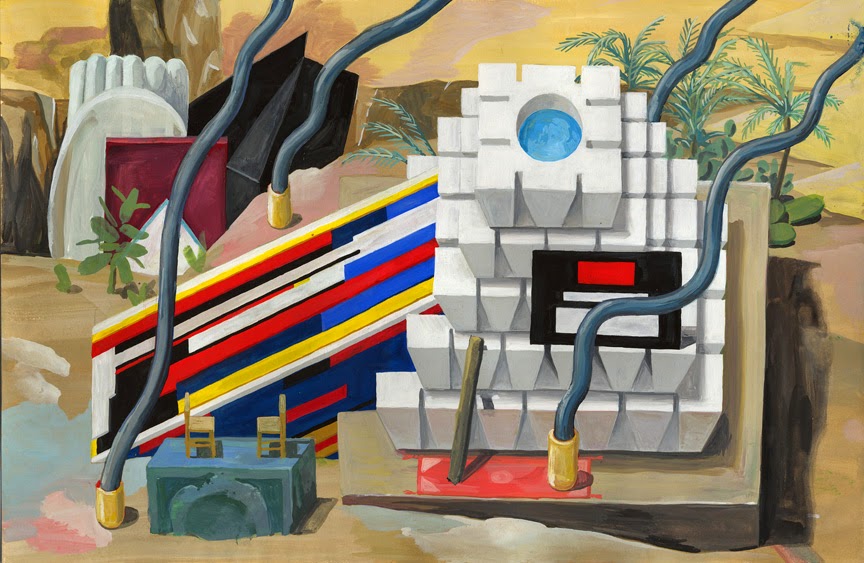 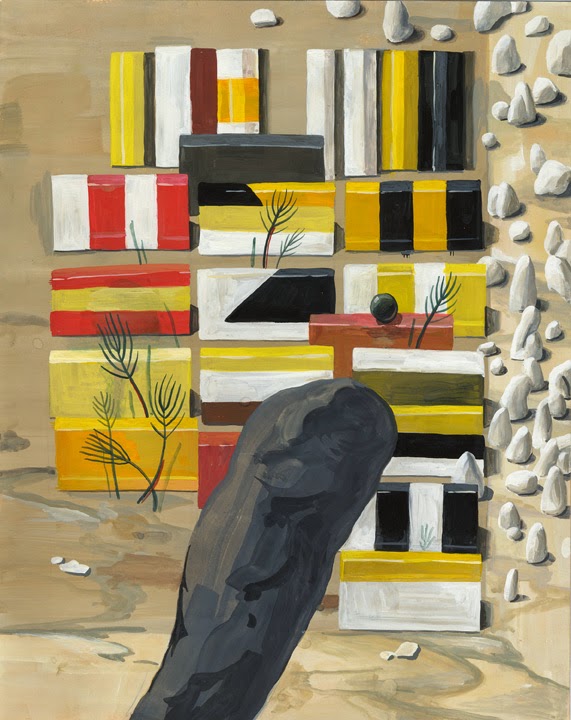 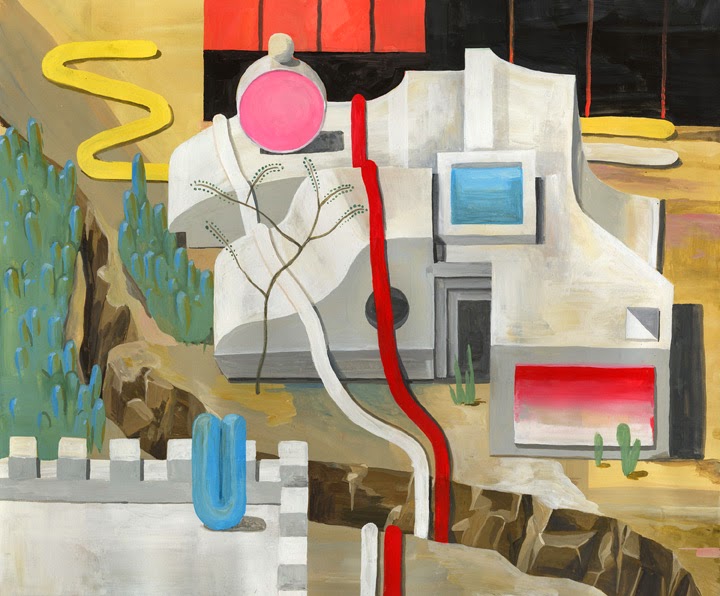 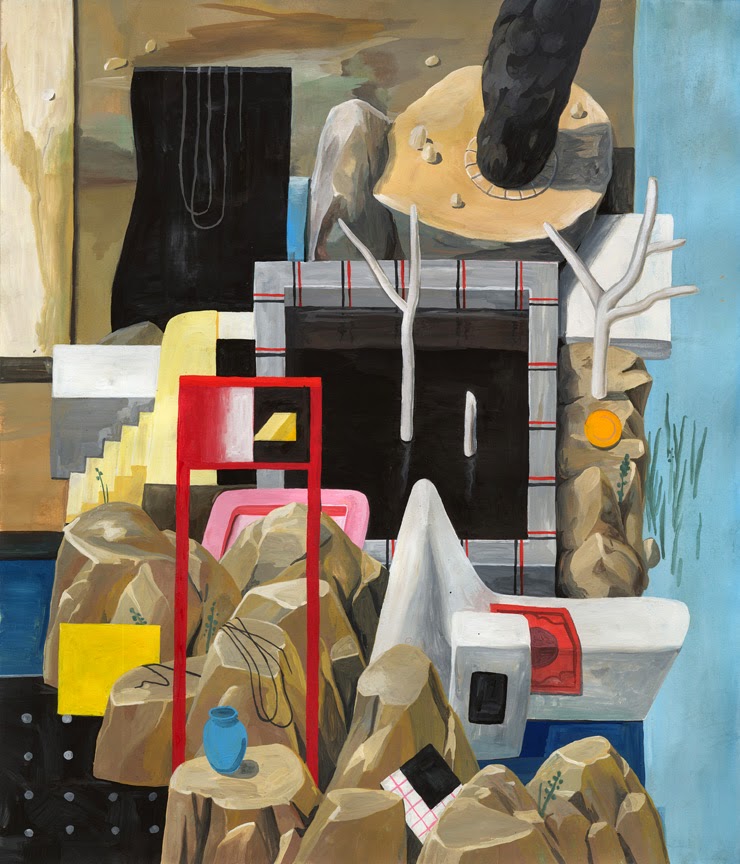 ADA Gallery is proud to present Cruiselandia, a new exhibition of paintings by Ryan Browning. Like maps drawn from a remembrance of an imagined territory, Browning's work explore concepts of space, perspective, and the role images play in the construction of memory.

Magical, mysterious landscapes with elaborate cities carved into mountainsides, dark caves, and floating worlds are the locations and the characters in Browning's work. Miró-esque sculptures, rainbow colored ladders, oriental rugs, and bonfires speckle the shadowy creases and plateaus that inhabit these fantastical worlds inviting the viewer to explore.

Regarding the ideas employed within his works, Browning states: "I think about games while painting - especially games that result in stories or abstract narratives, like the role-playing experienced in Dungeons and Dragons or the symbolic movement of conquering armies in Risk. The process of painting is building up a layered surface in a game-like fashion - you’ve got some constraints, but there’s also a lot of room within the fiction of painting or gameplay to explore the unknown. Chance accidents happen, altering the gamer/painter’s stream of thought. You give names to things that are otherwise represented by abstract data, shapes, textures, or systems, and you carve your way into that world by exploring and making changes to it as needed. You get to know the territory. Once it becomes familiar, you begin to inhabit it, tell yourself stories about it.

I’ve been living in Doha, Qatar for the past year, and some of my latest work is derived from/influenced by a couple games of chance I designed to simulate the visual confluence of architecture, fashion, and design that’s so striking here. The entire city is being built and rebuilt within the short span of thirty or so years, and it’s inhabited by expats from around the globe who’ve come to participate in that buildup. Aside from the Qataris themselves, nothing seems standard, and nothing seems permanent. Everything evolves so rapidly that the half-controlled, half-organic growth of the city, its population, and culture, seems like a simulation in and of itself."

Browning earned a BA from Brighman Young University and an MFA from the Mount Royal School of Art at MICA in Baltimore, MD. His work has been exhibited throughout the United States, most recently at Mulherin + Pollard Projects in NYC and at UNTITLED Miami with ADA Gallery (2013); and solo and group shows at the Creative Alliance (2012) and School 33 Art Center (2011) in Baltimore, MD; his work has been featured in print in New American Paintings (2011, 2013), and he has participated in residencies at St. Mary’s College of Maryland (2011) and Harold Arts, OH (2010). he currently teaches at Virginia Commonwealth University Qatar in Doha, Qatar.